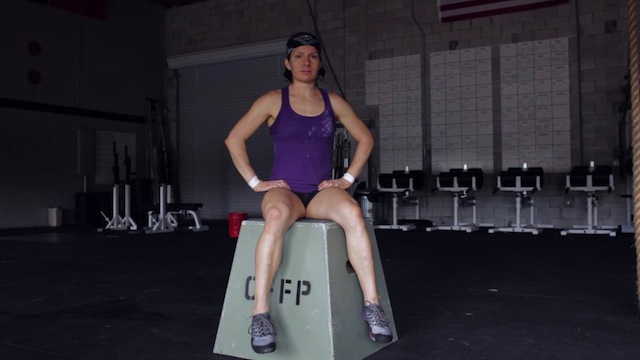 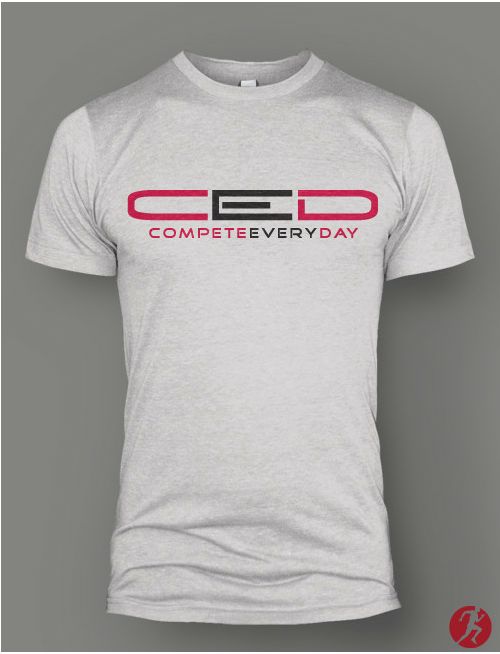 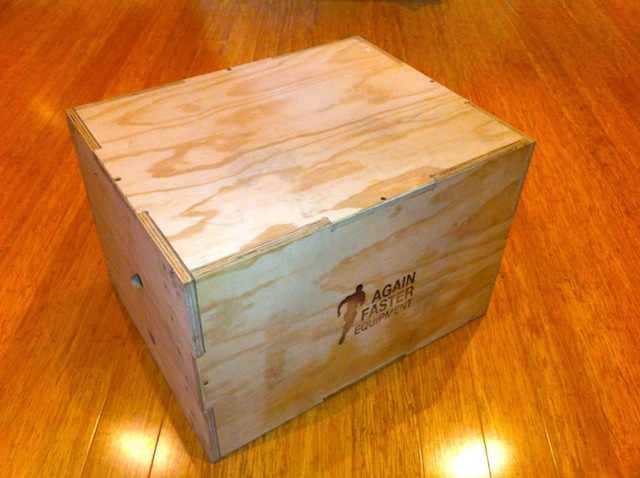 This week, we take a moment to review the Again Faster Puzzle Plyo Cube.

Being an I.T Project manager, I sometimes work some fairly inconvenient hours. So when most gym classes are on, I often find myself sitting in an office typing away, rather than in my box training. Now I don’t like missing workouts, any workout. So what do you do when your career gets in the way of your CrossFit training? Well, you bring the workout to you!

About a year ago I started putting together my garage gym. After moving my wife’s Volvo to make space, I started with a few kettlebells, then The Rogue Bar, bumper plates and a sandbag. Then I decided I wanted to get a box for those all-important box jumps and other plyometric exercises.

Why a box? Well, a box is great for conditioning and a great mental test. The physical benefits of high box jumps range from increased exclusivity to faster hip flexion. That’s right, high box jumps have a direct carry over to the Olympic lifts. The rapid hip flexion in the top part of the box jump is the same as the hip flexion needed in the third pull of the snatch and the clean. Throw some high box jumps in your training and you will not regret it.

So with that in mind I made my mind up that I was going to purchase a nice plyo box. However I live in Australia, so despite the fact we have great beaches, we don’t have as many purchasing options as our friends in the United States. That meant when it was time to get myself a box I had three options.

1. Buy from a local manufacturer: The affiliate I train at gets them made by a very nice wood shop guy. Only problem, I wanted two boxes, a 24 and a 30-inch. Unfortunately that order was not large enough for him to do a production run. This led me to option 2.

2. Make it myself from materials I purchased: Haha. Yeah right! I’m in I.T and do not have the time, or the skills for that. Seriously, I wouldn’t let our cats jump on any box I made. Although instructions on how to make one are on the CrossFit Discussion Board (http://board.crossfit.com/showthread.php?t=12749&page=1) so I went with option 3.

3. Buy from a functional fitness equipment supplier: Problem was, the one place I could find in Australia was out of stock. I even put my name on a waiting list but after several months of waiting I began to realise purchasing a simple box was getting harder than I thought.

So when my wife rang me from the recent CrossFit Australia Regional and asked if I wanted an Again Faster 3-sided box, I couldn’t say ‘yes’ quick enough. When it arrived at my front door, I was so excited I knocked it together and completed a quick workout in the garage the same night!

I’ve now been using it for a couple of weeks. Long enough I feel it was time I wrote a short review. So here are my thoughts. 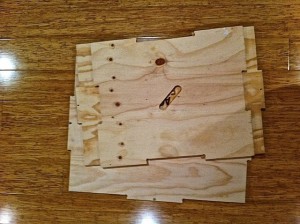 Easy to transport – Because it comes flat packed, my wife got it home easily in the back of the car (VW Golf, so it transports nicely).

Durable – Seems to be made from high quality timber. The box feels solid and secure when I use it and jump on it. Nothing worse than jumping on a box and feeling like it will topple over at any moment. With this Again Faster box this is not a problem.

Easy to Assemble – Holes are pre-drilled making it easy to put together (even if you are an IT Project Manager like me). 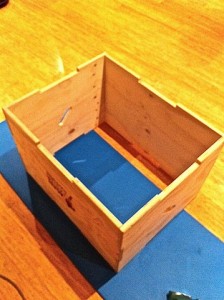 Dummy Proof – This leads on from the point above but I thought I should mention this again. Sides are grooved at different sizes, making it nearly impossible to put together incorrectly. I have zero ability with tools, even though my father and brother are both carpenters! So that fact I managed to put it together in just a few minutes is a good indication anyone can do this.

Attractive Design – Aesthetically I like the logo of the Again Faster “running man”. Overall, I think the box just looks nice. Sure it is just a box but hey I like nice equipment.

Light Weight – Even though it looks heavy, the box is actually very light, making it is easy to move around. That also means when I’ve collapsed after a WOD and need the kids to put the box in the corner, I don’t feel like horrible father.

3-Sided – This is the best selling point of this box. The fact it can be used as 20, 24 and 30-inch box means everyone in the family can make use of it and means it is a little more cost effective. 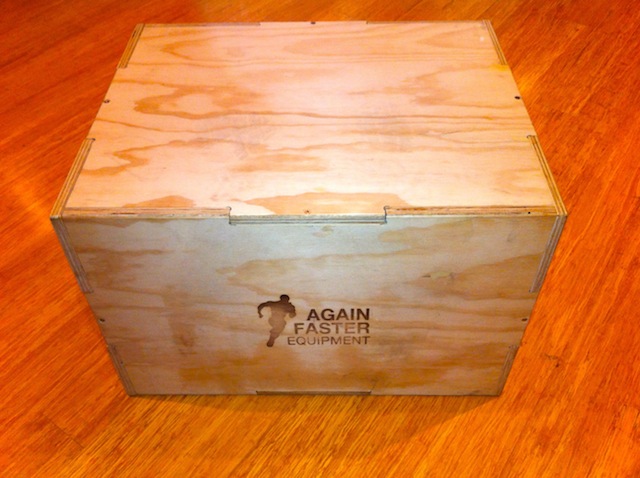 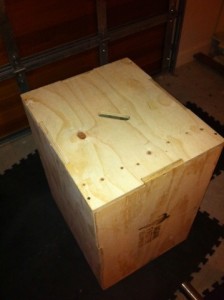 The side with the manufacturing error

Manufacturing Error – The biggest disappointment came when I tried to assemble the box and noticed one of pre cut sides had been machined upside down. This meant that the handles were on opposing angles. The only solution besides returning it was to flip it around and re-screw it in upside down. Lucky I hadn’t glued it!! My solution worked but it does mean that on that particular side, instead of the nice bevelled edge that should be there that would protect my shin if I slipped is now underneath. Yes I could sand it down myself, which I think I’m going to have to do but it is frustrating nonetheless.

No tools or screws – There was nothing supplied to actually put it together with. Surely supplying some screws for those screw holes wouldn’t be too much would it? I’m really not sure if that was a mistake or Again Faster just does not supply any. If the box came with directions I may have known but they were also missing (this is discussed in the point below). Additionally, there will be quite a few people that don’t have a screw driver so it would be nice if they supplied a small disposable one that I could use to assemble it. That may be wishful thinking but all I’m saying is if Ikea can send you a few tools to help you put the most elaborate furniture together surely the team over at Again Faster can throw in a basic tool, especially at this price 🙂 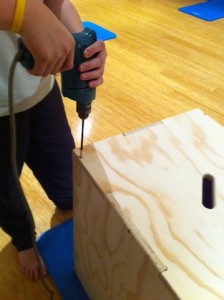 Directions – The box I purchased did not come with any assembly directions. I have since learnt this was a mistake and they do in fact ship with them. I was able to put it together without it but it is something to note.

Price – At $190 AUD or $159 USD this is the products biggest downfall. Anyone that has the tools and time could knock this up at a fraction of the price. In fact I know several people at my box that went out and purchased the wood, screwdriver, electric drill, glue, screws, ruler and wood all for under $100 and made their own 3 sided box from scratch. However those that can will, while others like myself with lean towards this option and is why it was so frustrating when I found there were no tools or screws supplied, no directions and one of the sides had been machined the wrong. You would think at this price point there really is no room for error. 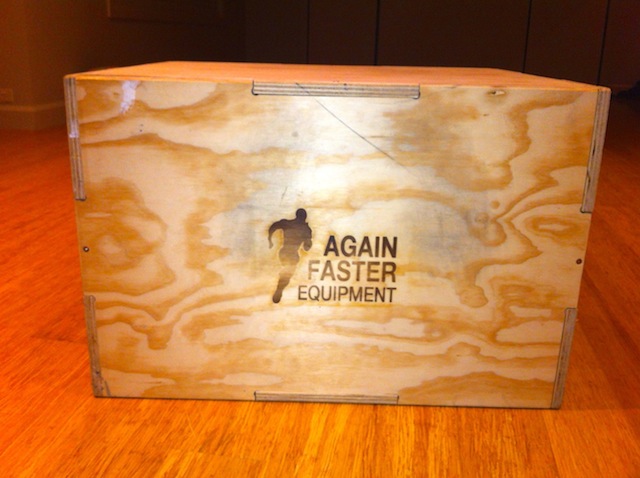 After testing the box is still looking good

I now have an awesome 3-sided box that my whole family has been using. The best part about it is that it comes in one piece, which is a great given my limited garage space.

The box is rock solid, looks good and feels strong when you jump on it. I did have concerns the ‘smaller’ sides would feel like they were less stable when jumping on it, but that has not been the case. In addition, it’s also not as cumbersome or heavy as I thought it would be to pick up and move. 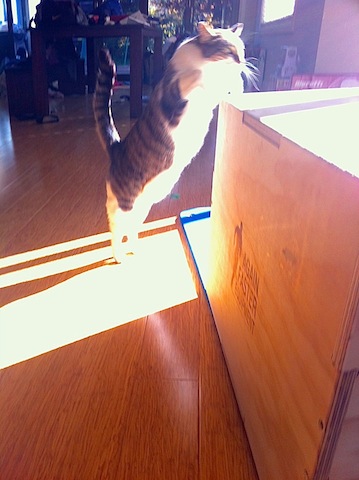 Silver our cat testing the box for us

Yet rating this box draws some difficulties. As I have noted above there are several issues. No directions. No screws and a manufacturing error. Despite these mistakes I have to say I still really like this box. Yes, if I purchased this from a bricks and mortar store there is no doubt I would return it and simply get a replacement. Yet returning something like this to an online retailer is just a hassle I really cannot be bothered to deal with. It is just the fact at this price point you don’t expect these kinds of mistakes to happen or not least this many of them. In saying that they are not huge errors just annoyances because at the end of the day it does not affect its function.

Although it must be said I know several people whom if they encounter this many issues it would be a deal breaker for. For myself if I had not had any of these problems I would very easily give this a 9 out 10, with the only point deduction begin due to the expensive price tag. However taking into account these three issues, I would give them a 6 out of 10 as what Again Faster offers is based on quality service and for a box at this price point there really is no excuse.

I guess the question at the end of the day is, would I purchase from Again Faster again? The answer to that is yes. I’m optimistic this was simply a one off error so I will give them the benefit of the doubt. So with that in mind I have to rate the box in a two-form approach. One rating will be my thoughts based on the box I received with these issues. The other rating will simply be based on the function of the box as a whole, which I think is only fair, as dare say I don’t think many other people will encounter the same issues I have.