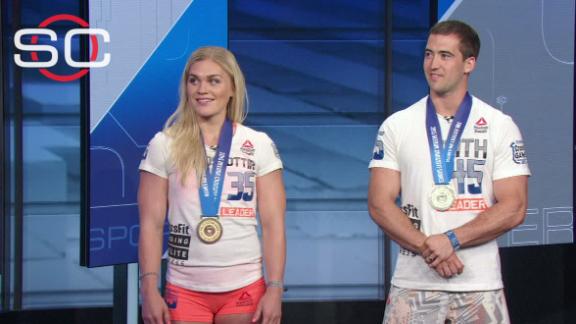 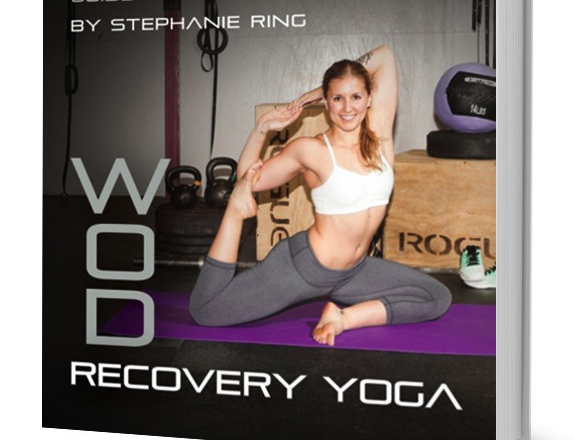 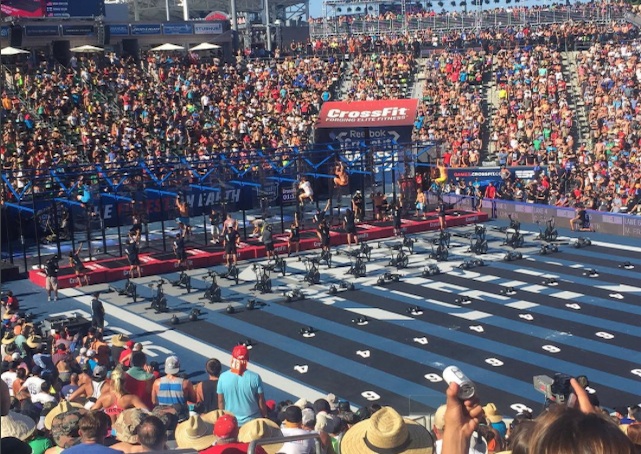 The 2015 CrossFit Games has come to an end and left us with a stack of great memories from one of the best year’s of competition yet.

There were plenty of highlights throughout the week in Carson, Cali. But here is a look at The Rx Review’s top 10 moments of the 2015 CrossFit Games:

Two 500m ocean swims and a 2mile paddle wasn’t enough to put any distance between the big Aussie in Chad Mackay and the young phenom Noah Ohlsen. While it was Finnish youngster Jonne Koski who took out the event, with Khan Porter second, the battle for third was the highlight of the opening day of action.

Ohlsen led Mackay out of the water for the final time, only for the Australian to steal back the lead in the sprint home. The two then ran side by side for the next 20 metres before Ohlsen surged ahead with one final sprint effort to edge out Mackay for third place. A memorable start to the 2015 competition.

Watch the finish below:

This Is why I'll be late anywhere for the next 4 days!! So close!! #crossfit #crossfitgames #aussiesontop

When Murph was first announced by Dave Castro some thought it would prove one of the less challenging events at this year’s Games. Not that the Hero Wod – 1 mile run, 100 pull-ups, 200 push-ups, 300 air-squats and finished with another 1 mile run – isn’t formidable, but it was a safe bet that the majority of competitors had done the workout at least a few times before.

However, the well-practiced workout coupled with a weight-vest and the hot California sun proved catastrophic, with many athletes, including podium hopefuls Kara Webb and Annie Thorisdottir, struggling to complete the event. Thorisdottir didn’t make the time-cap while Webb was carried from the finish line on a stretcher. Both suffered severe heat exhaustion.

Games Rookie and this year’s youngest competitor, 18 year-old Maddie Meyers, was also taken from the field in a stretcher and withdrew from competition citing “kidney issues”. Thorisdottir attempted the next few events but also withdrew on the final day of competition with her medical team saying she was unable to recover from the severe heatstroke she suffered during the Murph event.

There’s no doubt Murph was one of the most memorable events of this year’s CrossFit Games, and proved to be a great test of fitness for the 2015 field of athletes.

Daniel Tyminski on his ‘Murph’ experience:

Doing the #HeroWorkout #Murph with an actual plate carrier brought back some memories from when I was in the #Army. I was going on patrol in #Iraq with one of these things on and probably 70lbs of extra gear on my body in the blistering heat. Everyone said it was hot during Murph. Being deployed has given me some exposure to the wreck less heat so I was somewhat ready for it. Put some of my old patches on it for remembrance. Thank you for the plate carrier!!! #crossfitgames #crossfitgames @crossfitlindy @crossfitgames @crossfit #Airbone #Infantry #Blue @511tactical

8. Elijah Mohammed catches snatch on head and goes on to finish

In the final of the Speed Snatch Ladder, Games Rookie Elijah Mohammed, well-known for his love of the technical Olympic lifting, missed the final snatch of 275lb/124kg with the bar catching him on his head, sending him to the ground.

Following the collision, EZ lay on the floor and spoke with head judge Adrian Bozman before standing up and leaving the stadium floor. He soon returned with his lifting belt and with less than 20 seconds remaining before the time cap, and with the tennis stadium’s capacity crowd cheering him on, Mohammed completed the lift to claim 4th place overall in the event.

After claiming the title of ‘Fittest Woman on Earth’ at the 2014 Games, Camille Leblanc-Bazinet did not have the Games she wanted this year. With just three top 10 finishes during the entire week, the Canadian finished in 13th place overall.

Leading into the 10th event of the competition, Leblanc-Bazinet was outside the top 20, with her hopes of defending her Games title all but over. But, that didn’t stop her demolishing the Triangle Couplet which consisted of 15-10-6 Heavy Thrusters/Bar Muscle-ups.

It is no secret that Camille loves gymnastic movements, and with the crowd counting down her reps, she flew through the final six bar muscle-ups to complete the workout in a time of 4:47, nearly a minute faster than her nearest rival, Sam Briggs who finished in 5:32.

So apparently the CrossFit Games are tough, and the competitors are pretty much made out of steel. For the most part, anyway.

As athletes were interviewed by the media crew as the competition went on, the toll the events were taking on athletes’ bodies was becoming increasingly apparent. Big, red, and super sore looking burns were evident on a lot of collarbones. Day 2 saw athletes’ grip being put to the ultimate test with the 100 pullups in Murph, multiple snatches in the Speed Snatch Ladder and then the grip intensive Heavy DT.

By the Tiangle Couplet many struggled to get through the bar muscle-ups: Sara Sigmundottir and Jenn Jones were two among many who looked at their hands in pain/frustration. While grazed necklines and shredded hands are nothing new in the CrossFit world, the battering the bodies of the fittest on earth took over the days of competition was something many will not soon forget.

Seven time Games competitor Ben Smith has always been a force in competitive CrossFit finishing 3rd at the 2011 and 2013 Games. However, after his poor performance in the Sandbag Event on the opening day of the 2015 Games, which he failed to complete and finished in 34th place, he ended Day 1 well down the leaderboard.

Day 2 of competition saw him creep back up the leaderboard with a 10th place finished in Murph and an impressive 2nd place in the Snatch Speed Ladder. But it was on the Friday night during Heavy DT when Smith stamped his authority, powering through the barbell complex to claim his first Event win at the 2015 Games and put himself back into contention to win the overall title.

On Day 3 his streak continued, posting four top ten finishes, including a first place in the Soccer Chipper. Remarkably, heading into the final day of competition, Smith was the man to catch.

Many thought Mat Fraser, who Smith had wrestled with at the top of the leader board all weekend, would prove too strong in the final two events to claim the 2015 title. And after Pedal to the Metal 1, the second last event, it looked about right with Fraser claiming second place to move back into the overall lead.

In the end, it would be a head to head battle between Fraser and Smith in the final event. The equation was simple: whoever completes the workout first, claims the title of ‘Fittest Man on Earth’.

Smith started the final event strongly going unbroken on the deficit handstand pushups while Fraser was regularly no-repped, allowing the Games veteran to build a commanding lead. From there Smith powered home to finish the event in second place overall, and more importantly, ahead of Fraser to win this year’s compeition. 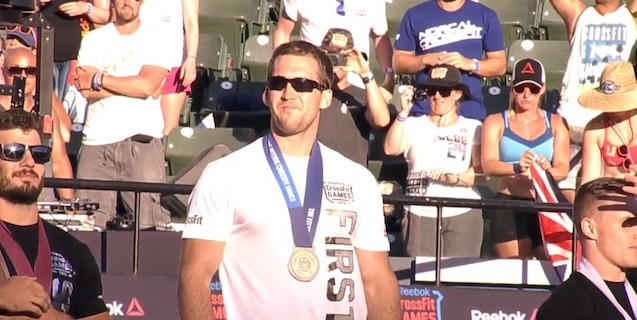 Ben Smith may have taken the overall win, but it was Spencer Hendel who owned the field in the final two events.

Hendel, who failed to qualify for the Games the previous two years, came back with a vengeance in 2015. The tall framed athlete typically excels at “big guy” events with heavy lifting, but this year he proved himself to be a well-rounded competitior, showcasing his gymnastic skills in the peg board climb to claim victory in Pedal to the Metal 1.

Next up, Hendel and the rest of the field were confronted with deficit handstand push-ups to kick off the final event of the Games. Given his size, you wouldn’t expect Hendel to excell in such a movement. However, much to the surprise of those watching, he ripped through the reps to build an early lead he would never give up.

The two event victories were enough to see Hendel overtake a number of athletes to finish 5th overall, his best ever Games result.

The unknown and unknowable… sure… but a peg what?

The first of the two final events at the 2015 Games introduced competitors to an old-school calisthenic staple that, it soon became clear, very few of them had ever used.

The event required three peg-board ascents (which included a controlled descent) followed by cals on the assault bike and rower and also additional dumbbell squat snatches for the men. Many, in fact most, athletes could not get through the three climbs with dozens failing to make even one.

There’s no doubt the peg board got the better of the athletes in 2015, and once again exposed weaknesses in some of the fittest athletes in the world.

Will we see the peg board back in competition next year? Either way, it’s time to start practicing! 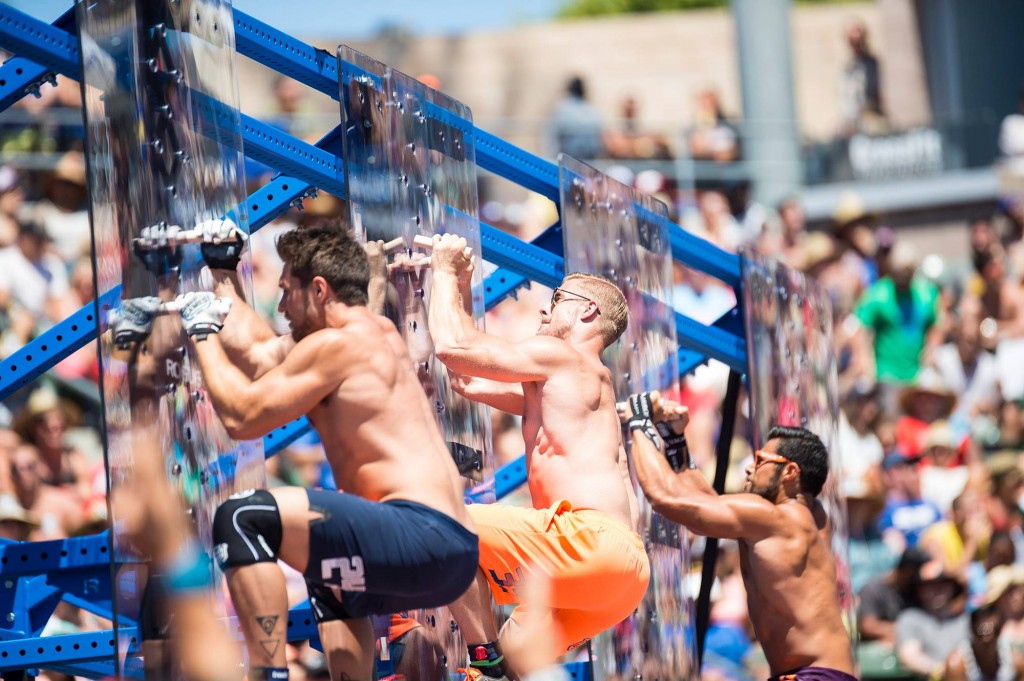 2. Katrin Davidsdottir; the Icelandic woman no one saw coming steals the throne

After failing to qualify for the CrossFit Games last year and finishing 24th in 2013, no one really considered Katrin Davidsdottir a threat for the 2015 title, especially given the stacked field of competitors. This year’s competition saw three CrossFit Games champions in Sam Briggs, Annie Thorisdottir and Camille Leblanc-Bazinet compete against each other, along with a number of heavily-hyped rookies, including Sara Sigmundsdottir.

Davidsdottir started off OK, finishing 18h, 14th and 12th in the first three events, but slowly climbed up the leadeboard to remain in striking distance throughout the competition. Consistency was the key for Davidsdottir, with the 22 year-old placing first in just one event, the final one of this year’s compeition. Her worst finish was 21st in Sprint 1.

In the end, her consistant performance saw her overtake the likes of Kara Webb, Samm Briggs and Ragnheiður Sara Sigmundsdottir late in the competition to claim the females crown in one of the biggest surprise results so far in Games history. 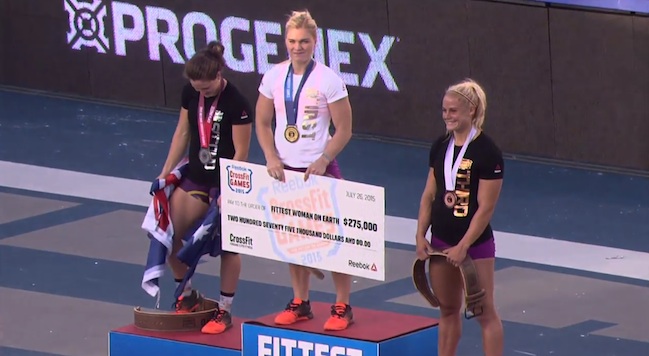 Coming into the CrossFit Games this year there were several rookies who impressed enough during the Open and Regional stage to be classified as ‘contenders’. Sara Sigmundottir winning her regional in commanding fashion was just one. Similalry, Brooke Ence won the stacked California Regional placing herself in good stead coming into the Games.

While Sigmunsdottir finished the weekend in 3rd place, an impressive and downright commanding way to end the grueling competition, it was another Rookie who stole the show in the female’s half. Very few had heard of Pacific Regional 3rd place finisher, and CrossFit Games rookie, Tia-Clair Toomey until she stood as number 2 on the podium.

Just like Davidsdottir, Toomey was one of the more consistent athletes throughout the competition with six top 10 finishes and only one placing outside the top 20.

Despite expectations heading into the 2015 Games, former champions Thorisdottir, Briggs and Leblanc-Bazinet all failed to make the podium in the women’s half. Remarkably, two rookies were standing there, along with an Icelandic surprise packet (Davidsdottir) who failed to qualify for last year’s competition. It was also the first time ever an American female did not make the top three!

After winning the past four CrossFit Games in the mens division, Rich Froning went team in 2015, representing his box CrossFit Mayhem Freedom. For most of the weekend it looked like Froning would not stand on top of the podium for the first time since 2010. However, in classic Froning style, his team came from behind to beat CrossFit Milford by just five points in the end and lift up the Affiliate Cup!

What did we miss? What moment do you think was the best at the 2015 CrossFit Games? Tell us in the comment section below: