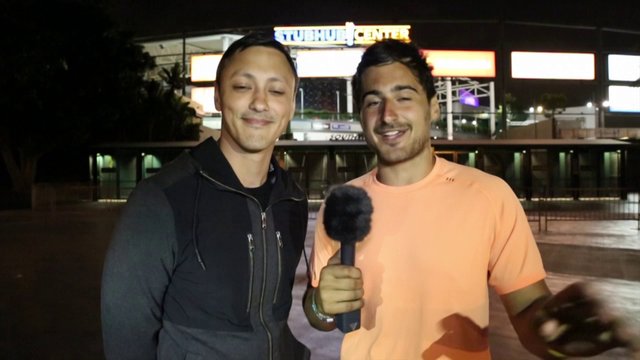 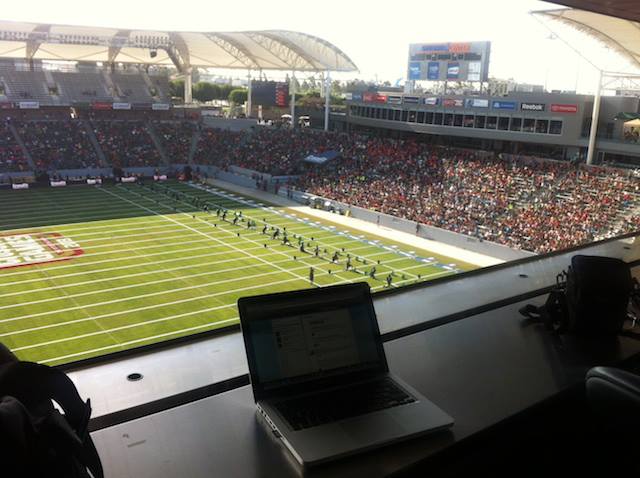 Day 3 challenged athletes with an extended version of a benchmark workout, an Olympic lifting ladder, and a throwback to a classic CrossFit Games workout.

Four rounds for time of:

Run 600 meters up and over berm

Three of the sport’s top names took the top three positions for the workout. Josh Bridges took first place with an impressive performance that showed off his trademark motor, even with heavier overhead squat weights that approached his body weight. Overall leaders Rich Froning and Jason Khalipa took second and third, respectively.

Khalipa’s third place finish was enough to fend off Froning from taking over the top overall spot, but Froning would end up only 11 points away from the lead going into Saturday’s second workout.

With another first place finish, Bridges carried over momentum from his event-winning performance in Friday night’s Legless workout and continued to move up the leaderboards. As Bridges continues racking up first place finishes, he’s dramatically closing in on a long shot, yet potential spot on this year’s podium.

If anyone has had a Games experience defined by peaks and valleys in performance, it’s Kaleena Ladeairous.

When she encounters the right workout for her, Ladeairous has proven that she can finish at the front of the pack. When the workout doesn’t play to her strengths, she finds herself at or near the back of the pack. Luckily for Ladeairous, Naughty Nancy was right in her wheelhouse and she earned her third first place event finish in the extended benchmark workout.

In the battle for podium positions, Christy Phillips’ 26th place finish gave way to Samantha Briggs overtaking her for the top spot in the Women’s division. Briggs finished second, while Valerie Voboril finished third in the event, carrying over momentum from Friday night that quickly sent Voboril up the Women’s leaderboards. 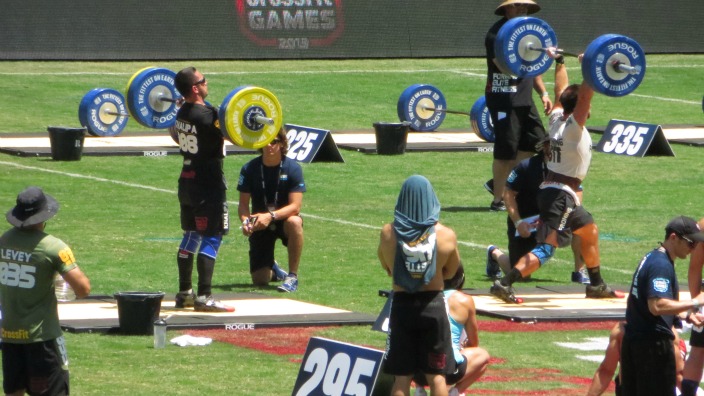 Khalipa and Froning do Battle in the Clean and Jerk Ladder

Despite the ladder going all the way up to 405 pounds, 355 pounds would not be successfully lifted overhead by any of today’s competitors in front of a packed StubHub Center crowd.

Both Aja Barto and Lucas Parker successfully cleaned 355 pounds to tie for first in the event, but neither athlete could fully get the weight overhead, despite heavy urging from the StubHub Center crowd. Starting his clean ladder at over 300 pounds, Parker electrified the crowd with his confident lifts and looked as if he might top Barto’s earlier performance at 355 pounds, but ultimately could not complete the heavy jerk.

Neither Froning nor Khalipa would finish in the event’s top spot, but the two found themselves lifting simultaneously at the end of the event, getting the StubHub Center crowd up on its collective feet. Froning finished the event in third place, as he was unable to clean 355 pounds to match Barto and Parker, despite multiple back to back attempts. Khalipa would finished in a tie for seventh place with his NorCal CrossFit counterpart Garret Fisher, topped by Ben Smith and Scott Panchik.

At the end of the Clean & Jerk ladder, the Men’s division had a new, but familiar overall leader – two-time CrossFit Games champion Rich Froning. 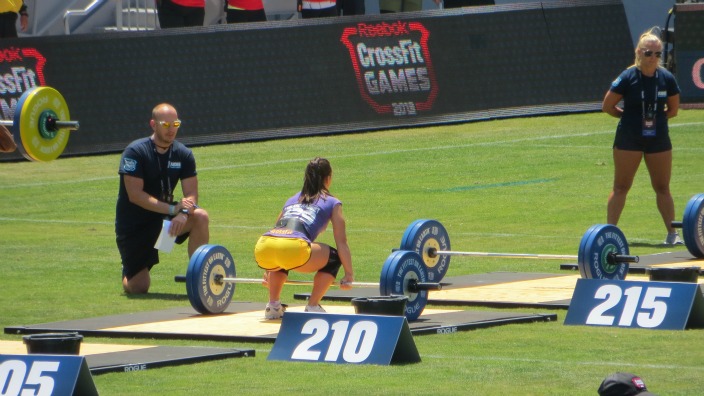 Though she sits near the bottom of the overall Women’s leaderboard, Amanda Goodman’s performance at this year’s CrossFit Games will be remembered by her first place finish in the Clean & Jerk event, where she topped two of the sport’s top lifters – Lindsey Valenzuela and Elisabeth Akinwale – and earned some of the loudest cheers of this year’s Games.

Though she’s out of contention for a podium spot, the popular Camille Leblanc-Bazinet moved well over 200 pounds with relative ease as one of the smallest athletes in the competition. Former Games champion Kristan Clever and overall Women’s leader Samantha Briggs tied for 22nd place in the event. While Clever has not been in contention for a podium spot all weekend, Briggs’ performance still was enough for her to go into the night’s event as the overall Women’s leader. 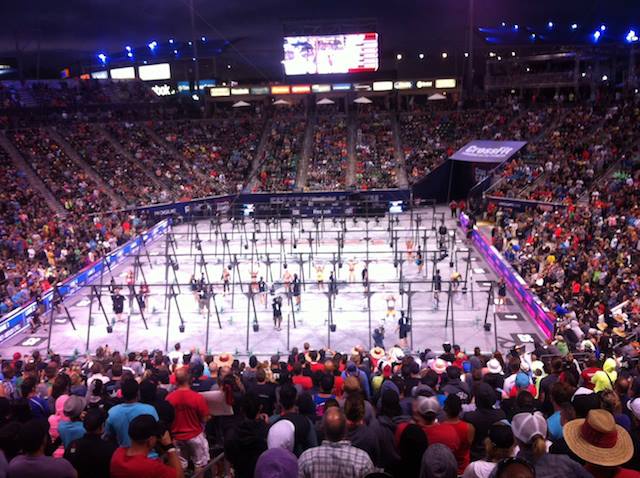 then, five rounds of:

The 2007 workout from that year’s CrossFit Games served not only as a throwback to Games’ past, but as notice to other Men’s competitors that Josh Bridges is still tracking down a spot on this year’s podium.

On a side note, the workout also provided the loudest cheers of the Games so far when physical specimens Froning and Leblanc-Bazinet took off their shirts halfway through each of their workouts, much to the delight of nearly everyone in attendance.

Times for 2007 were made or broken by how efficiently the athletes could move through their pull-ups, as the push jerks were handled with ease by all athletes, especially by Neal Maddox who almost appeared to strict press the barbell overhead. Both Lacee Kovacs and Daniel Tyminski recorded top performances that were made by efficient pull-ups, but Bridges ultimately made good on reports that he would be able to blow away the competition in this workout.

In the last event of the night, despite coming off the rower well after competitors that included Froning, Khalipa, and Fisher, Bridges put a pull-up efficiency clinic on display for a crowd that watched in disbelief as he appeared to come out of nowhere to not only win the event, but dominate it against top competition.

It appears as if the 2013 battle for the Men’s top spot belongs to Froning and Khalipa, but Bridges carries significant momentum into Sunday’s events where he, Ben Smith, and Marcus Hendren will challenge newcomer Garret Fisher for a spot on the 2013 Games podium. 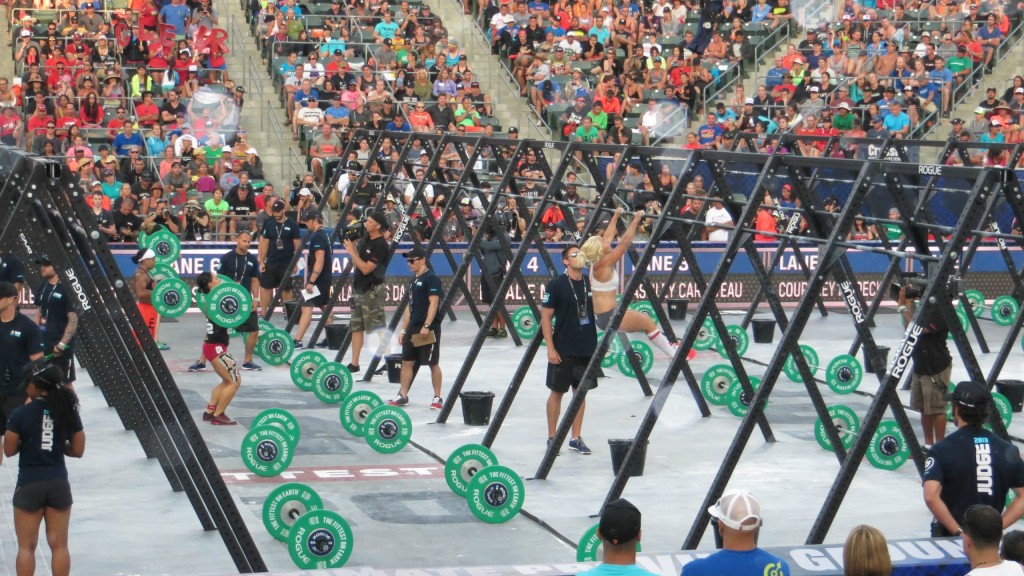 Natalie McLain got the StubHub Center on its feet and cheering early on with an electrifying performance in the first Women’s heat that looked as if it wouldn’t be topped in later heats.

McLain approached her pull-ups with rare speed and efficiency that rivaled those of better known CrossFitters Leblanc-Bazinet and Voboril, who would ultimately finish the event in third and first place, respectively.

After a slow start in this year’s Games, Voboril proved why she’s been one of the sport’s elite athletes by edging out McLain’s time by seconds against top competition in the event’s final heat. After establishing a manageable cadence on her row, Voboril attacked her pull-ups to gain on her competition, then fed off the crowd’s urging to quickly jump on the barbell to complete her push jerks.

With her first place finish and growing momentum, Voboril will enter Sunday’s events in the driver’s seat for an exciting four-way race for the Women’s third podium spot with former Women’s overall leader Christy Phillips, Anna Tunnicliffe, and Lindsey Valenzuela